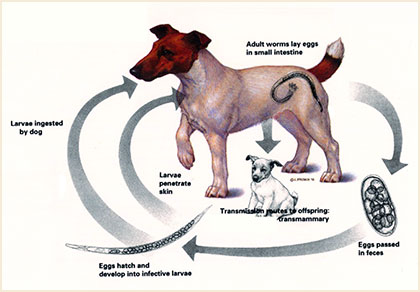 Internal parasites of various types such as worms can make any dog sick, and potentially lead to serious health problems including anaemia, malnutrition, diarrhoea and even heart and lung problems. This is particularly true of puppies, as they do not build up their immune systems fully until they are older.
Anti-worming medications, which are called anthelmintics, are available to kill and eliminate parasitic worms, and ensure that your dog stays healthy. However, for puppies, their delicate digestive systems may find worming upsetting which can also lead to some short-term mild side effects of this necessary procedure.

How do dogs catch intestinal worms?

There are a huge range of potential means of transmission of worms, including fleas, faeces and contact with other dogs especially for puppies who haven’t built up they’re immune systems yet.
You might not even be aware that your dog has worms, as not all worms are visible or cause an obvious illness; but worms such as roundworms, hookworms, tapeworms and whipworms may still be present. 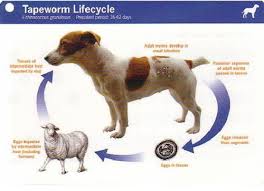 How to get rid of worms
Wormers are not the same as vaccinations; they do not prevent your dog from contracting worms in the first place, or ward off later infections. Wormers work by killing and eliminating worms present within the intestine of your dog, but they will remain at risk.
Wormers come in many different formats too, so you have a lot of options for finding a good fit for your own pup. Powders, pills and spot-on treatments are common, but you can also get liquid wormers and sometimes, injected wormers (administered by your vet) too. These wormers all work to eliminate worms your dogs intestines, so that they are passed out naturally in the faeces and any eggs are also killed before they can grow to maturity.

How to worm your dog correctly

It is important to follow the instructions supplied with your wormers, and to pick the right wormer for the size and age of your dog. Your vet will be able to work these things out for you, and advise you on what type of wormer to buy.

What happens after worming?

Different wormers work in different ways; some will literally dissolve the worms present within your dog’s intestines, while others kill them internally so that the body eliminates them. Often, worms are attached to the intestinal walls and so some work by paralysing the worms so that they detach from the intestinal wall and are eliminated.
After the wormers have done their job within your dogs system, the worms will be shed naturally within the faeces. Depending on the type, you might not be able to see them, and this does not mean that your dog was worm-free or that worming was ineffective. Sometimes you may be able to see larger worms in the stools; tapeworms and roundworms are particularly noticeable.
Most dogs and puppies do not suffer from any side effects of worming, but in some cases, worming might potentially make your pup mildly sick for a day or two. Mild diarrhoea and/or vomiting, a slight loss of appetite and generally being a little lethargic for a day or two is perfectly normal.