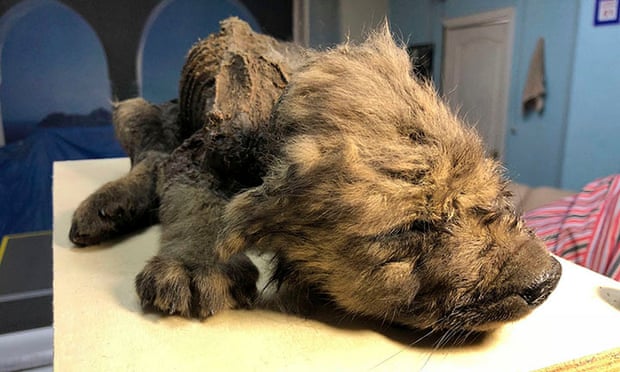 In Siberia back in 2018, tusk-hunters accidentally stumbled across the world’s oldest puppy, almost perfectly preserved under the Siberian ice for over 18,000 years.

Buried in the permafrost near the Indigirka River, north-east of Yakutsk, the 2-month old puppy – now known as Dogor – could be a vital link for scientists to help them understand how the modern domestic dog came to be.

Dogor (which means “friend” in Yakutian) is so well preserved that he still has his whiskers and eyelashes.

Unfortunately, DNA analysis has not yet been able to identify what species Dogor is. Scientists are working hard to understand whether he is a very modern early wolf, a late ice-age wolf, or a very early domesticated dog.

Love Dalen, professor of Evolutionary Genetics, says that the first sequence of DNA tests has not been able to tell us whether Dogor or a wolf or a dog.

“The Centre has Europe’s largest DNA bank of all canines from around the globe, yet in this case, they couldn’t identify it from the first try.

Sergey Fedorov, from the Institute of Applied Ecology of the North (part of the North-Eastern Federal University in Yakutsk), says, “This is intriguing. What if it’s a dog? We can’t wait to get results from further tests.”

Scientists are excited that this could be a representation of the early stage of what we now know as the domesticated dog.