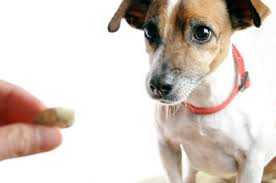 An interesting theory was written on why dogs continue bad behaviors, and it is that if they are reinforced just once, they will most likely try the behavior again. The example given is that if a dog sees your neighbors in the hallway and he barks at them (the behavior) but then they get in an elevator or go down the stairs, your dog will believe his magic barking powers have caused the neighbors to disappear into thin air, thus reinforcing that the barking behavior worked. Like when playing a game of rock, paper, scissors, you may be more inclined to use rock many more times than the other two options simply because it has worked for you at least once. Or, if you were offered a first class seat on a plane because you showed up very early to check in, you would probably continue to show up early for every flight as long as that one time it was rewarded.

Dogs are the same as humans in this way. They will perform behaviors based on if it has worked for them before (i.e. jumping onto the table during Thanksgiving and hitting the sweet potato jackpot) no matter how many times it continues to work after that. Call it a hunch, like in rock, paper, scissors. So, if you’re feeling confused, this is what I took from all of this: if your dog was last rewarded because you asked him to lay down, he knows that lying down is what got him that delicious morsel, and will continue to try it to get a reward as a result. Ergo, if you continue to reward your dogs accordingly for the things that they do right, they will try their hardest* not to do the things that they are not rewarded for (as long as you are making sure that they have a plan B behavior that you actually can reward them for, i.e. in the case of the disappearing neighbors, start rewarding your dog by teaching the “quiet” command). God speed and good luck, dog owners.

*Chelsea Dogs cannot make any guarantees that your dog won’t jump onto the Thanksgiving table to indulge in a sweet potato feast.