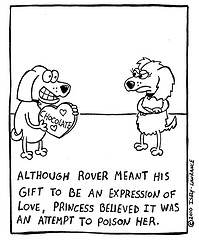 This week’s comic is coming to you a little early in honor of Valentine’s Day. This is only my second Valentine’s Day, but I have learned from humans that a Valentine’s Day misunderstanding is not an uncommon things. Apparently in the dog world these types of misunderstandings are common as well, even though I imagine us to be the superior species. But hey, love is messy in every species, right?

He just wanted to give Princess a gift, poor guy. Here’s to hoping you human men out there don’t screw up like Rover, and if you’re a Princess (no pun intended. Okay, pun intended) then at least try and be nice if something like this happens to you.

I'm a lean little pup from New York with a passion for shoes, napkins, and peanut butter. I like causing trouble, and I get away with it because, well look at me, I'm adorable. My humans are constantly screaming my name followed by "drop it" (this is when I know they want to see my best dance moves, so I chase my tail), or "be quiet" (they try to help me with my spying abilities as much as possible when I'm peeking out the window staring at our neighbors). I love making my humans chase me, and hanging out with all of my friends in the neighborhood. I am constantly checking my twitter while my humans are out at work, so say hi to me there!

A Boy and His Dog