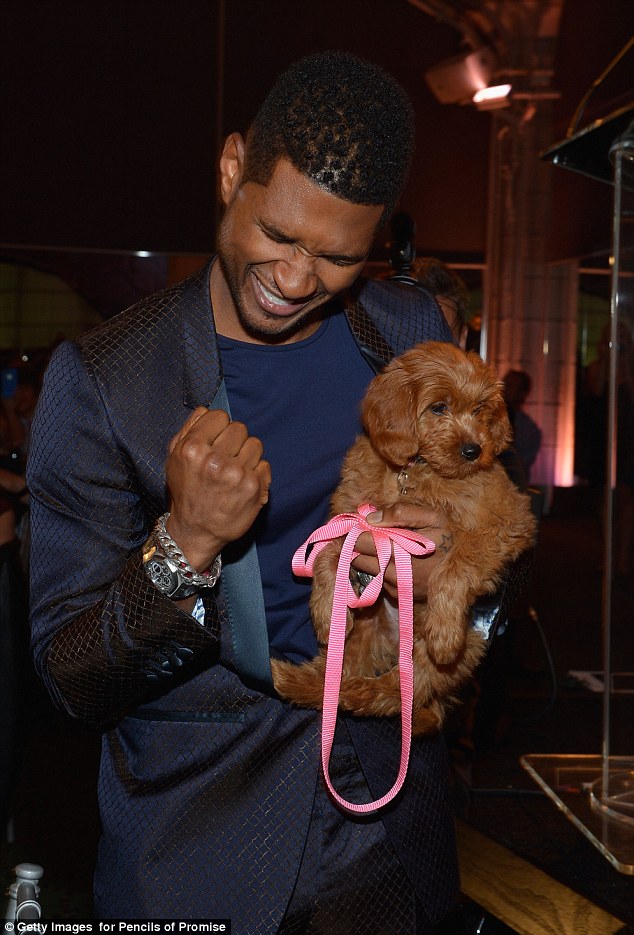 It’s called a goldendoodle, and for the amount that Usher paid it could well be made of gold.

The rapper shelled out an astonishing $12,000 on the puppy. But it was all in the name of charity, with Usher bidding at the Pencils of Promise Gala in New York on Thursday. He outbid Gossip Girl star Jessica Szohr to win the adorable puppy.

The money was all going to the non-profit organization that Justin Bieber endorses and serves to provide education in impoverished nations. Judging by the happy look on Usher’s face when he was handed his furry prize with the pink leash, it was money well spent.

A Goldendoodle is a cross-breed between a golden retriever and a poodle and they are coveted for their temperament as well as their coat, which sheds less. Szohr apparently bid an impressive $11,000 for the pooch, but Usher beat that by $1,000. Usher took to Twitter to share the news of his new family member. ‘Poppy Raymond is what I’m think of namin’ her . . . however there are two gregarious three- and four-year-olds that will have the last say — and the responsibility that comes with her,’ Usher tweeted in reference to his two sons, Usher Raymond V and Naviyd Raymond.
(source: The Daily Mail)