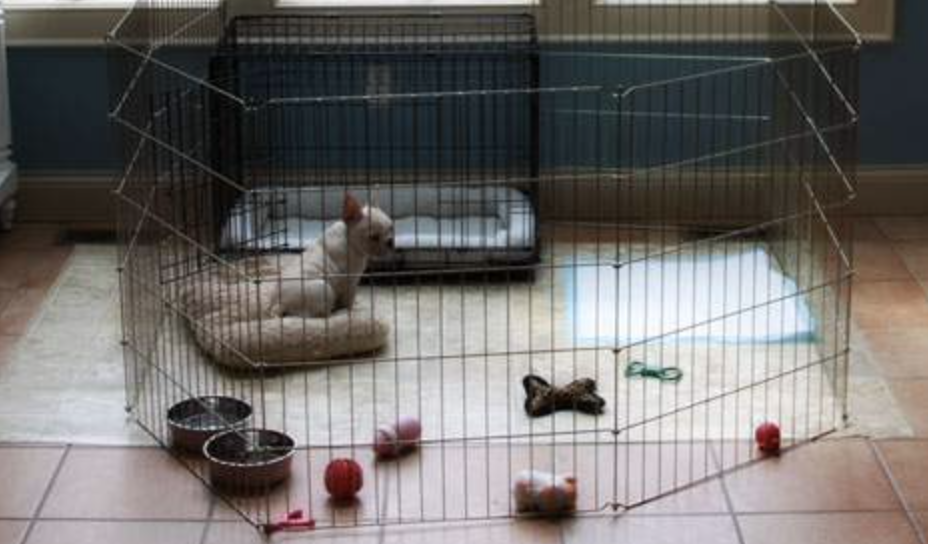 If you are thinking about getting a puppy I’m sure you will be trying to decide if you should get a puppy pen or not. So, to make this decision a bit easier for you this blog will go over the pros and cons of puppy pens.

What is a puppy pen?

Just in case you have never heard of a puppy pen before. I will go over what they are and how they are generally used. A puppy play pen is essentially a fence that create a safe space for your puppy roam around and play in. It is much bigger than a crate so gives your puppy enough space to do all of its daily activities. Without destroying the house or causing mischief.

Puppy pens create a safe space for your puppy where they can’t injure themselves or damage your house. This will give you the security and peace of mind to leave your pup on their own for a bit.

In comparison to a crate puppy pens will give your puppy a lot more space to roam around and play.

Puppy pens are usually either made of metal wires or mesh so you can easily watch your puppy to make sure they are safe and happy.

Helps with the transition to a new home

Pens create a smaller space for your puppy to be introduced to. So rather than giving them free reign of the whole house straight away, which puppies can find very overwhelming, you can slowly introduce them to different areas of the house using the pen. So, the pen effectively acts as your puppies ‘safe space’ where they will feel calm and happy.

Not ideal when toilet training

A puppy pen can make it more difficult for your pup to distinguish between their toilet and their bed. So, if you do want to use a puppy pen whilst toilet training it would be a good idea to not encourage toileting in the pen and stick to a schedule of taking your pup outside to go to the toilet regularly.

Bigger, bouncy and high energy puppies especially can quite easily escape a puppy pen so you will need to constantly supervise them, so they don’t injure themselves trying to climb out.

Overall, puppy pens can be a great tool to have when you have a young puppy, especially if its small. But there are a couple of drawbacks to consider so it might be worthwhile considering a crate as well as a play pen. This is because crates have the added security of a lid so very few puppies will escape a crate and it is a smaller more cosy space which can be very useful for toilet training.

Hi I'm Amy and I'm currently in my third year of an Environmental Science degree at Plymouth University. My family have two little dogs a Jack Russel and a Jack Russel X Patterdale who fuelled my love for all animals but especially dogs! Now I have my own dog a chocolate Labrador!

Everything You Need For Your New Puppy