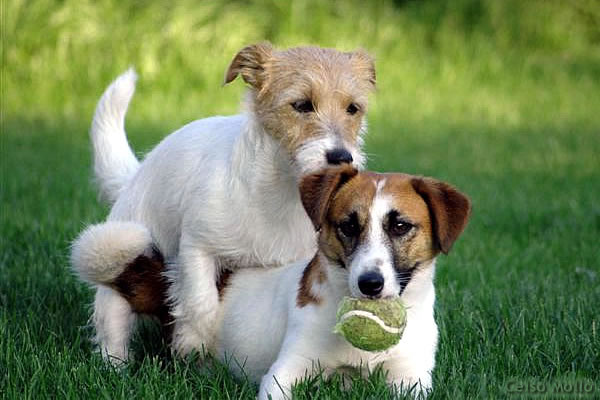 Puppies often mount and hump their littermates, other playmates, people and toys. Some experts believe that this behaviour works as future practice for sexual maturity. As puppies reach sexual maturity, they start to mount other dogs in sexual contexts. After they’re neutered or spayed, many male and female dogs continue to mount because they have learned that the behaviour is pleasurable. It is a common misconception to believe that this behaviour stops after neutering/spaying.

Why Does Your Dog Do It?

Sexual behaviours like mounting are part of normal play behaviour. Some poorly socialized or under-socialized dogs excessively mount other dogs in response to play solicitation.

Response to Stress or Excitement

Some dogs respond to stressful or exciting situations by mounting or showing sexualised behaviour. For instance, after meeting a new dog or person, an aroused and excited dog may mount another dog, his owner or a nearby object, like a dog bed or a toy.

Mounting can often become a compulsive habit, especially if a dog does it in response to stress. Compulsions like mounting can interfere with a dog’s normal functioning.

Dogs sometimes mount other animals and people to display social status or control. A dog mounting may want to gain control of the other dog or even the situation.

Various medical problems, including urinary tract infections, urinary incontinence, and skin allergies, can influence a dog’s mounting behaviour. These issues can be serious if not properly treated and require medical attention rather than behavioural treatment.

Dogs suffering from one of these or other medical issues often spend a lot of time licking and chewing the genital area. If you notice your dog excessively mounting, licking or chewing himself, or rubbing his body against things, take him to a veterinarian to rule out medical concerns.