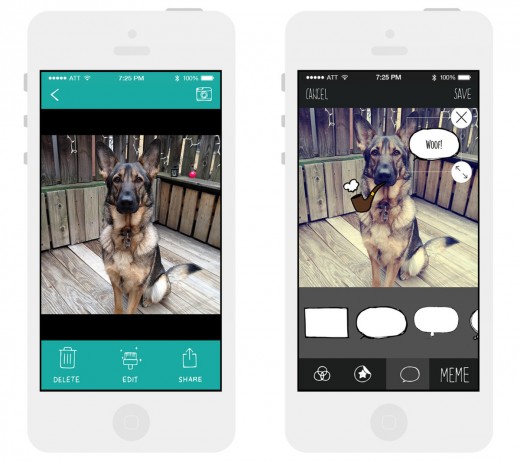 New York-based Bark&Co have created a new app to help make pictures of your pooch even more enjoyable. The Barkcam app helps to get your dog’s attention before the photo is taken.
Users begin by choosing from a range of sounds to peak their pet’s interest, including cat meows, squeak toys, doorbells and a bag of treats rustling.

The sound is triggered by tapping the shutter, hopefully getting the dog to deliver its best expression before the photo is taken.

Reviewers seem very satisfied with the canine friendly app, with some saying the noises really help to get their dog’s attention

The cool noises the camera makes right before taking the pic makes my dog do the cutest and funniest faces,’ one review said.

Once the photo is taken, users can add text, filters and stickers, or share it on Instagram, Facebook and Twitter.If that’s not enough, BarkCam has its own built-in social network to share doggy photos.

Images can also be shared on one of the increasing number of ‘social petworks’, such as Klooff or Yummypets. Like Facebook, these social petworks lets owners create profiles for their animals, with details of the pet’s breed, age and even interests.

Instagram may be filled with doting dog parents, but now a new breed of ‘social petworks’ is taking pet photography to a new level .For instance, YummyPets launched in the UK last year after proving popular in France.

YummyPets closely resembles Facebook, and as well as letting owners post photos and updates for their pets, the site helps put them in touch with useful and local pet services. It can also be used to find missing pets, and features an instant messaging service.

Elsewhere, MySocialPetwork looks like a Pinterest for pets. Grids of animals photos are organised by tags, and photos can be liked.

BarkCam is available in Apple’s App Store, with an  Android app is planned for August.