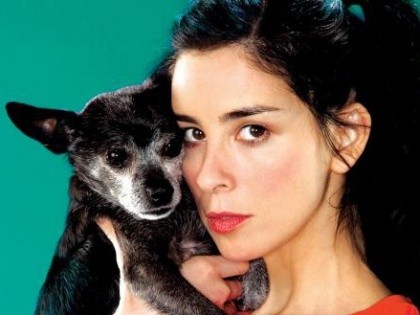 Sarah Silverman is notoriously known for her comedy and ‘I don’t care what you think of me’ attitude. While she is funny most of the time, I did discover a post on WhoSay from her that definitely tugged on my heartstrings. Though she inserts humor a touch within the post, the main content is heartbreaking, and something every dog owner has gone through or will go through – the passing of a furry friend. Her dog Duck passed away, and she wrote a little obituary type of thing for him on WhoSay. I promise that you will not be able to read through this without crying. Toward the end I couldn’t even see the post because of my tears. You’ve been warned. But in all seriousness, I completely relate to the feelings she conveys in this little tribute, and feel for her.

I wrote an obituary type thing:
Duck “Doug” Silverman came into my life about 14 years ago. He was picked up by the State running through South Central with no collar, tags or chip. Nobody claimed or adopted him so a no-kill shelter took him in. That’s where I found him — at that shelter, in Van Nuys. Since then we have slept most every night together (and many lazy afternoons.) When we first met, the vet approximated his age at 5 ½ so I’d say he was about 19 as of yesterday, September 3, 2013.
He was a happy dog, though serene. And stoic. And he loved love.
Over the past few years he became blind, deaf, and arthritic. But with a great vet, good meds, and a first rate seeing-eye person named me, he truly seemed comfortable.
Recently, however, he stopped eating or drinking. He was skin and bones and so weak. I couldn’t figure out this hunger strike. Duck had never been political before. And then, over the weekend, I knew. It was time to let him go.
My boyfriend Kyle flew in late last night and took the day off from work to be with us. We laid in bed and massaged his tiny body, as we love to do – hearing his little “I’m in heaven” breaths.
The doctor came and Kyle, my sister, Laura and I laid on the bed. I held him close – in our usual spoon position and stroked him. I told him how loved he was, and thanked him for giving me such happiness and for his unwavering companionship and love. The doctor gave him a shot and he fell asleep, and then another that was basically an overdose of sleeping meds. I held him and kissed him and whispered to him well passed his passing. I picked him up and his body was limp – you don’t think about the head – it just falls. I held him so tight. And then finally, when his body lost its heat, and I could sense the doctor thinking about the imminent rush hour traffic, I handed him over.
14 years.
My longest relationship.
My only experience of maternal love.
My constant companion.
My best friend.
Duck.