Rescue pup used as bait to be face of dog festival

A rescue pup who was used for bait in dog fights is set to be the face of Salford’s first dog festival.

Twinkle, a Shar-Pei cross, was rescued from a torrid life that involved her being used as bait to train vicious dogs to fight. Council wardens rescued her from the balcony of a flat in the town and were moved to tears at finding her there. Twinkle was left alone with nothing to shelter her from the elements; covered in wounds and weighing half her ideal weight. 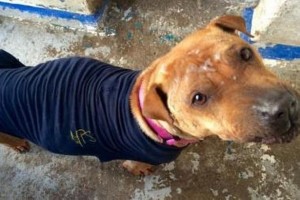 Erica Eaton, one of the wardens who found her, told the Manchester Evening News: ‘The weather was horrendous. It was cold, windy, and raining heavily. We got a call to a flat and they were claiming they had found the dog the previous night in the park, but the dog was attacking their dogs, so that’s why they wanted us to pick it up. I pulled back the curtain to the balcony and saw a ball curled up. She didn’t move and had been out there several hours. [The other warden] Wil went over to her and and she couldn’t stand, as soon as she tried to she fell. She was emaciated. At that point I started crying. I had never seen anything so horrendous. We took her to our van. Wil was sat with her on his lap, her head was limp. There was nothing in her eyes, she was giving up. We got her to the vets. They said she was severely underweight – she should have been 25 kilos. She was dehydrated and the vet said she would be lucky if she lasted the next hour. After a lot of TLC from Rochdale Dog Rescue, this beautiful girl made a full recovery. ” 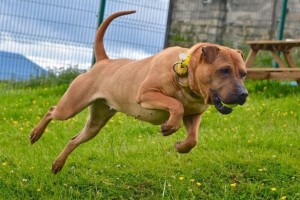 In honour of Rochdale Dog Rescue, Salford council dog warden’s are putting on the Dogs in Salford festival at the end of the month.