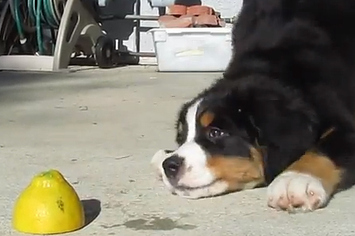 This video is one of the cutest things that I have ever seen. It’s pure nonsense, but it’s just so adorable. This little Bernese mountain dog puppy vs half a lemon is so silly and precious, the only thing that’s missing is a few frames in slow motion and the ending being a bit of a taste test with a sour face and reaction. Videos like this are awesome because like babies, puppies small little baby stages are so fleeting because they grow so fast. Getting something like this on camera is so great because that dog is probably huge now. Though, I think I would like to see this dog five times bigger doing the same thing. It would go from painfully cute to tears down your face hilarious. Dogs are just a win win, aren’t they?

Puppy Can’t Get Up

Try Not to Laugh at These Animals