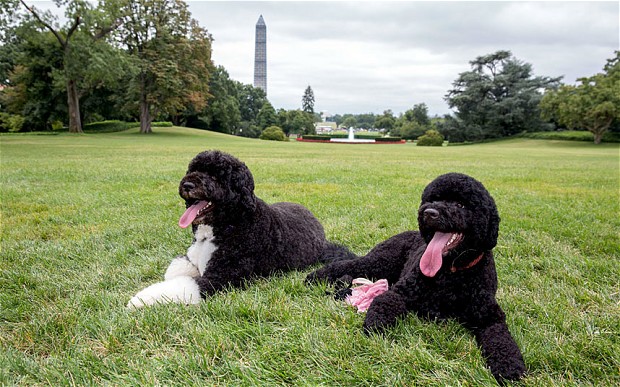 “I think there is an element for Michelle and me of, you know, we see what’s coming and we need to make sure that we got somebody who greets us at the door when we get home,” Mr Obama said in a television interview on CNN’s “New Day” programme that aired on Friday.

On Monday 19th August 2013, The White House announced the arrival of 1-year-old Sunny, a Portuguese water dog, the same breed of dog as their current dog Bo who they have had since 2009. The said Sunny would be a companion for Bo.

Mr Obama promised a dog to his daughters Malia, now 15, and Sasha, now 12, when he first was elected president. In the interview, he said he “couldn’t be prouder” of his daughters, describing them as poised, smart, funny and kind.

But between school, sports practices and other activities, the girls have had less time for Bo, who was “getting lonely” and needed a canine companion, Mr Obama said.

“Bo was getting a little down in the dumps inside the house,” he said.

First Lady Michelle Obama is trying to teach Sunny to sit and catch, he said.

“And, also there have been a couple accidents,” he admitted.

“We live in rental housing. We didn’t have to put down a deposit, but we are making sure that it gets cleaned up for the next occupant.”