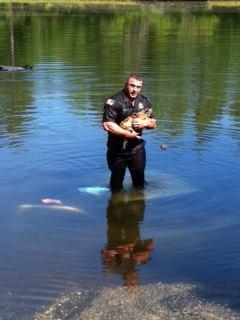 A Massachusetts police officer dove to save a dog trapped in a submerged car in a body of water this past Saturday. Officer David Harriman has become quite the internet hero this week after this photo of him holding the saved dog went viral:

Harriman dove eight feet into murky water to the car that had sunk after the owner of both the car and two dogs alerted the police that one dog swam with the owner to the shore, but the other was frightened and still under water. Harriman returned to the surface with the dog in his arms, who was in good health but very frightened. Donna MacMillan Nichols, a Facebook user who saw the photo said of Harriman in a comment on the photo, “Officer Harriman [is] a true hero to me. He didn’t have to do what he did…[You’re] a fantastic human being”.

Many other users paid their respects to Officer Harriman and his heroic efforts in the over 3,500 comments on the photo:

Officer David Harriman is said to be an avid dog lover by all of his co-workers, and the Carver Police Station has gone from having less than one thousand Facebook followers to over 20,000 likes and 2,500 shares of the top photo above in under eighteen hours as of Sunday afternoon, and as of Tuesday morning, over 7,000 shares and 49,000 likes.