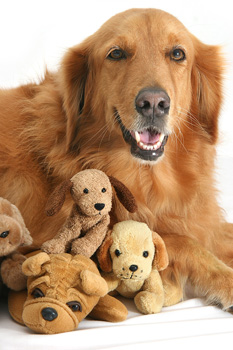 A phantom pregnancy is when a female dog behaves to all intents and purposes as if she is pregnant, which may involve both behavioural and physical changes, when it is impossible for her to have conceived. This condition does not occur in spayed bitches, and is not hugely common even in un-spayed bitches, but is something that owners of un-spayed bitches should nevertheless be aware of.

If your un-spayed female appears to be displaying the signs of a phantom pregnancy, the first step to take is to consider carefully if there is any likelihood at all that the pregnancy might be genuine. To rule out genuine pregnancy for certain you may wish to have your vet perform a physical examination and possibly, an ultrasound scan, just to be sure. 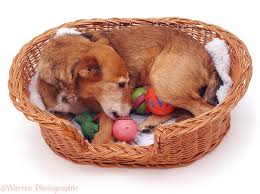 If you are totally sure that your bitch cannot genuinely be pregnant but is behaving oddly, the symptoms of a phantom pregnancy can include:

A female dog’s lifecycle is managed by her hormones, and the same hormones that bring her into season also fuel the inherent desire to breed and produce a litter.

If she undergoes a season without becoming pregnant, generally the hormone levels that prime her body and emotions for breeding will naturally drop off as part of the cycle until the lead up to her next season. However, in some cases, this can take longer than usual to happen, triggering the evolutionary desire and expectation in the bitch to give birth to young.

The best way to rid your female dog of the misery of phantom pregnancies is to have her spayed. One of the main problems of a phantom pregnancy can be milk production, so preventing her from doing this by means of a buster collar or dressing her in a t-shirt may help to shorten the length of the phantom pregnancy.

If the phantom pregnancy goes on for a long time or is particularly problematic, your vet may recommend a hormonal treatment to dry up her milk production and counteract the effect of the female hormones that are leading to the generation of the false pregnancy symptoms.

Phantom pregnancies are not physically harmful but they can lead to a great deal of stress for the duration, so it is important to work closely with your vet to ascertain the best course of action to follow.

How to Look After Your Dog’s Paws

Dogs Are Cleaner Than Bearded Men!