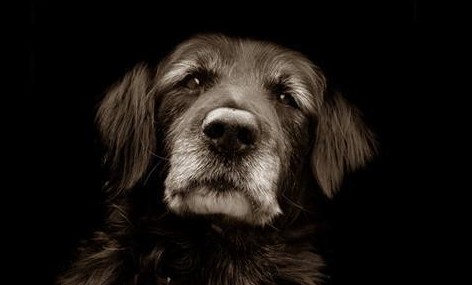 Once your dog starts to slow down with age, there are normal changes in aging dogs that you can expect to face. All dogs get older, and it’s important to make sure that you, your family, and your other dogs look out for your older dog and support him along the way as his body and life change.

Change in nutritional needs and weight.  Like in humans, a dog’s metabolism starts to change as he ages. If you feed your dog the same amount of food through his whole life, he will gain weight as he gets older. This is due to both the metabolism slowing down, as well as naturally decreased energy level. When your dog’s energy level starts to noticeably decrease, the amount that they are fed should as well to avoid potential obesity, which is one of the biggest problem in older dogs. Nutritional needs will change as well in that an older dog requires an increase in fiber and a decrease in fat in his diet. As your dog slows down, his digestive system will as well. Older dogs are more prone to stomach aches and constipation. They should be drinking plenty of water. 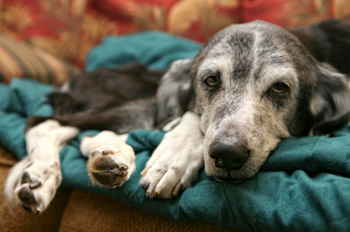 Skin, hair, and coat changes.  As with humans, a dog’s coat will start to gray with age, most typically around the muzzle first. Grooming is necessary much more often in an older dog in general, but should you notcie a significant change in your dog’s coat over time, see a vet to ensure that it isn’t a sign of disease or nutritional deficiency. An older dog’s skin can become thinner and more dry by nature, though again, a significant difference should be mentioned to the vet. Benign fatty tumors in the body are common and easily removed if the dog’s health is well enough, but cancerous tumors are also common in older dogs, so all masses should be brought to your vet’s attention.

Decreased mobility.  Older dogs will lose muscle mass and definition as a result of being less active. This will make it more difficult for them to move around with ease, which begins a cycle. Arthritis is common in older dogs as well, and dogs with previous joint issues in their early life will be especially affected by Arthritis. Stiffness is common in most aging dogs, and your vet could provide supplements for joint health.

Decreased organ function.  The liver, lungs, kidneys, heart, and other organs can all experience a decrease of function with your dog’s age. Lung capacity decreases and they will tire more easily. The risk of heart disease and kidney disease greatly increases, and the liver’s ability to detoxify the blood and produce numerous enzymes and proteins gradually decreases with age.

Changes in behavior.  Older dogs are more likely to experience anxiety as they have a decreased ability to cope with stress. 62% of dogs over the age of ten will likely experience some of the symptoms of canine cognitive dysfunction, which include confusion or disorientation, restlessness at night, loss of house-training abilities, decreased activity level, decreased attentiveness, and not recognizing friends or family members.

Hearing and vision loss.  Slight hearing loss is difficult to detect in dogs, but severe hearing loss will present itself as more obvious. This could materialize in the form of aggression or disobedience due to your dog being unable to hear commands or being startled when he is approached because he could not hear you coming. Clapping hands or stomping feet to communicate through vibrations is an options for dogs who are suffering from hearing loss. Any sudden changes in the eyes should be taken to your vet with concern, but many older dogs develop cloudy eye lenses, which they can usually still see well with. Like with hearing, slight vision loss is hard to detect, but any severe loss should be obvious.

Decreased ability to fight off disease and infection.  An older dog’s immune system does not function near as well as a puppy’s, so infections in older dogs are typically more serious as they are less able to fight them off. It is important to be on top of your older dog’s vaccinations to prevent infections.

There are many different types of changes your dog could potentially go through as he ages. While he may experience some of these, it is unlikely that all will present themselves. Keep an eye on your dog, report changes to your veterinarian, and love him just as much, if not more, than the day you brought him home as a spritely little puppy.

Teach Your Dog To Back Up