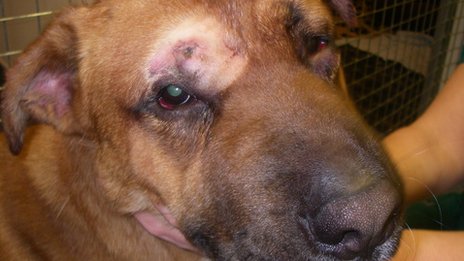 A man has been jailed for shooting his dog six times and battering it with a shovel and then leaving the animal to die in a ditch.

Marc Turnbull, 38, shot his dog, a cross-breed named Rocky, five times in the head and hit him with a shovel in an attempt to kill the dog.

Turnbull, from Northampton, claimed that inflicting the injuries was his only option after he had failed to find another home for the dog.

Magistrates heard Turnbull shot the dog with an air rifle, battered him with a spade and left the dog in a ditch on the A5 near Weedon, Northamptonshire, on April 21 this year.

Turnbull, who was traced due to the dog being microchipped, admitted three charges of causing unnecessary suffering to Rocky.

He was jailed for 20 weeks at Northampton Magistrates’ Court on Tuesday. Rocky survived his injuries and has since been rehomed by the RSPCA.

RSPCA inspector Michelle McNab said: “This was a truly unbelievable case that involved immense suffering to the dog.

“Fortunately Rocky was found and amazingly he survived.

“He has since been rehomed to a loving family.”

In our opinion, Marc got off lightly with only a 20 week sentence. What do you think? Please leave us your comments below.