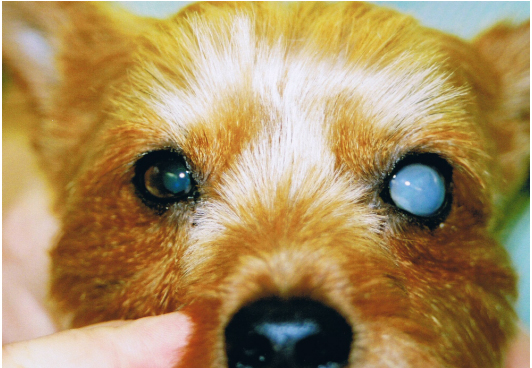 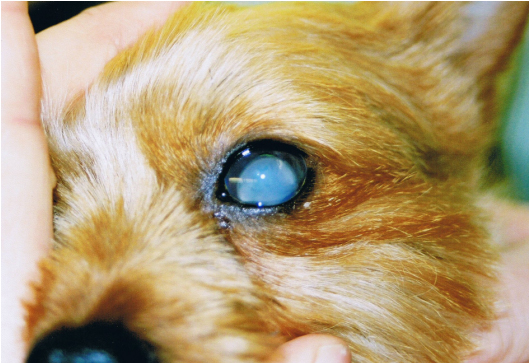 What is lens luxation?

Lens luxation is a painful, usually genetic condition when the lens shifts out of position and moves either to the front or into the back of the eye. Once this occurs, two things can happen; the lens either becomes trapped in the front of the eye, water-logging the window of the eye resulting in glaucoma. Or, the lens can damage the tissue in the retina which then causes detachment. Both outcomes cause pain and blindness if left untreated.

The majority of lens luxation cases found in dogs is hereditary and caused by a weakness in threads holding the lens in place. The condition has been found present in around 45 breeds of dog but is common in terrier breeds, including jack russells, bull terriers, and Patterdale terriers, but can occur in other breeds, including crossbreeds. Some cases of lens luxation are due to other existing eye diseases such as cataracts or glaucoma.

Signs and symptoms of lens luxation in dogs

Unless a trauma has occurred resulting in injury, lens luxation has few to no symptoms as it develops incredibly quickly. In the initial stages, the eye may look slightly red and sore which can lead to misdiagnosis of conjunctivitis, or other mild infections. The eye usually appears red and uncomfortable, often with a bluish tinge on the cornea. As the pressure in the eye increases the optic nerve situated in the back of the eye becomes damaged resulting in blindness.

Once the lens has dislocated it is relatively easy to see that it has become detached. In most cases, referral will be made to an ophthalmic specialist, such as The Animal Health Trust where specialist equipment can be used to diagnosis lens luxation and for the best care. 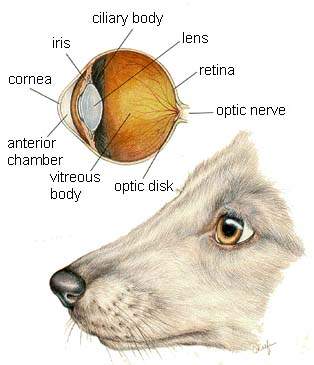 In most cases surgical removal of the lens is likely to give the best chance for preserving sight. The surgeon will make an incision in the cornea where the luxated lens is and is then gently removed. Dissolvable stitches are applied to the wound and dissolve over a few weeks. Following surgery, regular checkups are still a necessary requirement to maintain optimum eye health for your dog.

Unfortunately up to 30-40% depending on the condition of the eye complications are seen resulting in blindness. These complications include glaucoma, eye bleeding and retinal detachment. Even after successful surgery, it may still be necessary to continue with long-term medication (eye-drops), in particular when glaucoma occurs, as this helps keep the pressure in the eye under control and comfortable for your dog.

Does Lens luxation affect both eyes?

Primary lens luxation affects both eyes in hereditary cases, though usually not at the same time. Without treatment the second lens will usually dislocate within months of the first, resulting in blindless in both eyes. Glaucoma usually develops, resulting in one or both eyes having to be removed in order to relieve the pain. Preventative treatment is available for the second eye in the form of eye drops which can be effective. Failing success of medication, early removal of unstable lenses in the second eye gives an increased chance of success.

If vision is permanently lost then removal of the entire eye may be suggested as the alternative is very painful for your dog. Eye removal is a daunting prospect, but it is important to remember that this will make your dog much more comfortable, and contended. This may seem like a gruesome procedure but the fur grows back where the eye is removed, resulting in a perfectly acceptable appearance.

The future for lens luxation

In 2010 researchers at the University of Missouri, and the Animal Health Trust in Newmarket discovered the gene mutation that leads to this painful eye condition. DNA tests are now available, allowing breeders to test potential carriers, and affected breeds, with hope that with new awareness and continued work, this disease can eventually be eliminated completely.