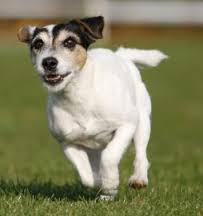 Despite the best efforts of many responsible breeders, genetic conditions and illnesses are still present in the Jack Russell Terrier.  This is not an inclusive list of problems but some of the common ones, and ones to be aware of if you own a JRT.

Cardiomyopathy, an abnormality of the heart muscle, can result in lung edema (water in the lung), weakness during exercise, and sudden death. This defect is difficult for the average owner to detect, but if you notice your JRT having trouble after a walk or a run in the park or if you hear her wheezing when she breathes, don’t discount this possibility.

The most common of these are the inguinal hernia and the umbilical hernia. These occur when a portion of the intestine falls through the scrotal opening or through the umbilical opening. You will notice a bulge in the dog’s stomach or scrotum that looks like a growth.

The term high toes or short toes applies to a condition in which the toes of the front feet are shorter than normal in a full-grown terrier, giving the appearance of toes that don’t touch the ground. This occurs primarily on the front feet, but it has been seen on hind feet, as well. Although not debilitating or life threatening, this trait has been seen in many irresponsible breeding circles and isn’t supposed to be present.

Legg-Calve-Perthes disease is a septic necrosis, or degeneration, of the head of the femur. It usually doesn’t manifest itself until a puppy is at least six months old, and it can result in progressive rear-leg lameness. Be aware if one of  your terrier’s legs looking different than the other three or that one is particularly susceptible to becoming sore.

Lens luxation is a fairly common inherited disease of the eye in which one or both lenses become partially or completed dislocated from their normal location behind the cornea. In the case of complete dislocation, the lens will be painful and the eye will look red or opaque. Lens luxation, if left untreated, can lead to blindness and time is of the essence with this condition as it occurs out of the blue.

Von Willebrand’s disease is a common, inherited bleeding disorder that manifests itself through abnormal platelet function. Symptoms include ongoing bleeding of the gums and nose, bloody urine, prolonged bleeding during estrus or after the birth of a litter, and excessive bleeding after surgery or by a slight nick while trimming your Jack Russell’s nails. It is caused by an insufficient von Willebrand factor, a blood protein that binds platelets to blood vessels. It can now be checked for with responsible breeders or via your vet to see if the disease is present.

Although this list certainly is daunting, as always any condition is usually treatable as long as symptoms are examined at the start of any problems.  If you notice any of these symptoms in your dog or if you suspect something isn’t right, notify your vet right away. Some disorders can be managed and treated; others are irreversible, but ultimately identifying problems quickly gives your JRT much improved chances.