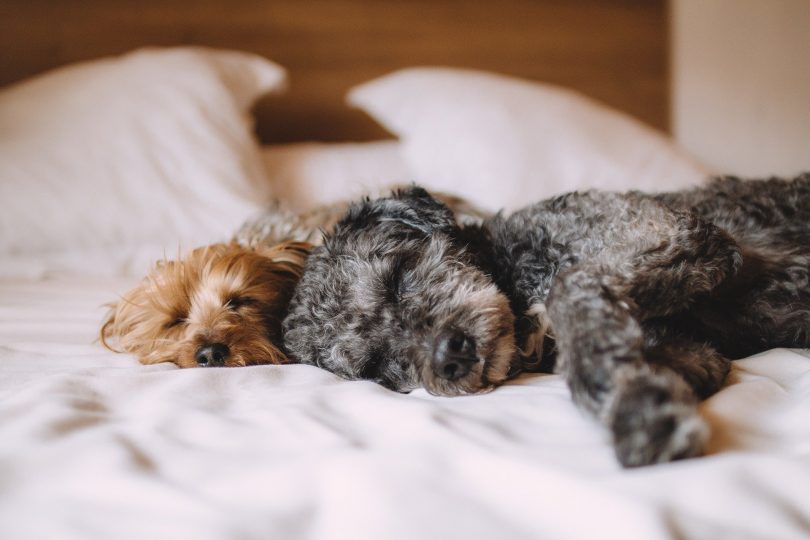 Research has shown that just under less than 50% of pet owners let their dogs sleep on their bed or in their bedroom with them.

But is it safe and hygienic for both parties if we let our pups sleep with us each night? Are there any cons to sharing your bed with your furry friend?

Feeling safe. Traditionally, Aboriginal Australians would sleep next to their dogs/dingoes for warmth and because they believed they protected them from evil spirits.

It eases depression and anxiety. Co-sleeping with your pup could be having a positive impact on your mental health.

Natural alarm clock. While the sound of your phone’s alarm might start your day with a feeling of dread, waking up naturally to the wagging tail of your dog sets a great positive mood for the rest of the day.

Disturbed sleep. Dogs are fidget bums. They can be like toddlers to sleep with, affecting your quality of sleep. They kick, yip, move around and can be very annoying! Studies have shown that people who sleep with their dog report more sleep disturbances than people whose pets didn’t sleep with them.

Allergies. Allergies can be exacerbated by sleeping with a dog. There’s also a higher risk of spreading diseases (both from dog to human and from human to dog). However, such transmission is rare and as long as you practise good hygiene (showering daily, changing the bedding often) you shouldn’t have a problem.

Fur. A malting dog will leave tufts of fur all over the place, so you’ll have to get used to hovering more often or at the very least having a separate sheet for your pup to lie on.

Urban myths/misinformation. Some people believe letting a dog sleep in “your turf” will cause the dog to believe he is more “dominant” and in charge than the human. However, more recent research has shown that dogs don’t really believe in hierarchy systems, instead seeing themselves as part of a similar family to that of humans. And dogs in packs sleep together for comfort, warmth and protection, so you may actually be building the bond between you.

Basically – it’s entirely up to you whether you choose to let your pup sleep on your bed. There’s no need for concern if you share sleeping space with your dog, though there are exceptions:

Aside from that, you should be fine! If concerned, consult your vet for advice.