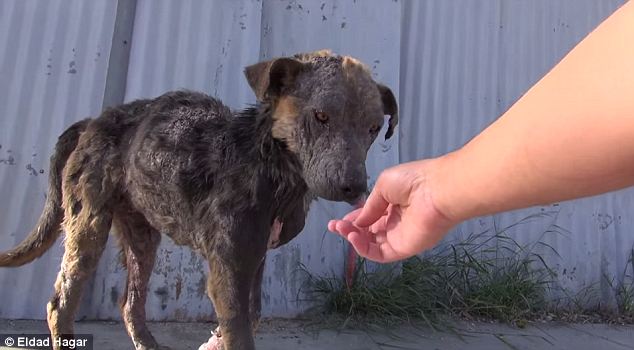 This video shows the incredible transformation of a former street dog.

The poor pup was found by California based group, Hope For Paws, once they heard that a stray dog was suffering with mange whilst stranded on the streets of Los Angeles.

At first the abandoned dog was hardly able to stand, almost hairless and had to be coaxed over to the team with hamburger pieces. This heart-wrenching video shows the uphill struggle that the team encountered to nurse the stray – later named Bethany – back to health.

Top of the list was to get the filthy pup into a bath. She was found to be so dirty that the water surrounding her painfully swollen paws was turned deep brown. Next a vet diagnosed that she was indeed suffering from severe mange as well as many bacterial infections. It was then that the healing could begin.

By day 5 Bethany was at home around her handlers and could be seen laying and snuggling up to them. By day 36 it’s barely believable to see that they same dog had undergone an incredible transformation.

American police dog dies after being left in hot car