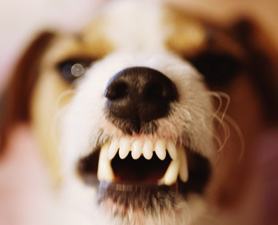 If your dog is growling or snapping, maybe both, it could be due to aggressive tendencies, or it could be the only way he knows how to communicate a certain feeling. Regardless of the reason, the behavior has to be stopped before it escalates to biting, so here are a few tips on how to stop your dog from growling and snapping. 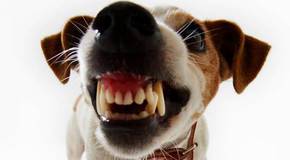 Correct growling and snapping right away. Straight off the bat you should be correcting your dog’s growling and/or snapping with a firm “no” at the onset of the behavior. When he stops growling, reward him with a “good boy”, or in the beginning, a treat if it’s handy at the exact moment of training so that he knows what he is being rewarded for. He should never be rewarded during the bad behavior, only if it is corrected and stopped.

Control situations in which bad behavior occurs. If there is a specific time when your dog growls, for example, when someone goes near his food dish while he’s eating, then you should already be ready to correct the behavior at that time. Make sure that no one goes near him while he eats so that he knows he’s not being threatened, or leave him in a closed room or fenced in area to eat alone. When he is finished take the bowl away and let him back out with everyone else. The same goes for other instances when your dog barks. Isolate the action that causes him to growl or snap and control the situation by finding a solution that makes your dog comfortable.

Enforce more rules in the household. If the growling and snapping is becoming a real problem, it is possible that your dog does not have enough rules, therefore he is acting out because he knows he will most likely get what it is that he wants. This is the same as a dog begging or crying to get what he wants, but because snapping could lead to biting, rules for the dog in the house need to be tighter. Make sure he is not allowed on furniture unless invited up onto it, or allowed into a certain room without being invited. Make sure that walks are taken often to keep him exercised, but that he heels and walks at your pace and doesn’t rush in front of you to get through doors or outside. By teaching him the rules of the house, he will know where he fits in and how and that he cannot get whatever it is that he wants by growling at you or snapping at you.

If the issue persists, see your vet about the issue or consider formal training.