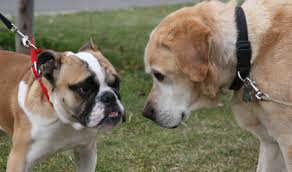 Though I’ve only ever had one dog at a time, most of my friends with dogs own two or more, which is think is so much more fun for the pooches. They have a playmate, a best friend, and someone to keep them company and snuggle with while the humans are away. However, most families who own two or more dogs probably didn’t get them all at the same time. There are important things to consider when thinking about how to introduce a new dog to the family when you already have one at home.

1. Introduce the new dog gradually. A mistake commonly made by dog owners is introducing the two dogs by bringing them straight into the house all at once and expecting the dogs to get along. This will cause a lot of territory issues between the two dogs and could cause them to fight and not get along the way you assume they will.

2. Bring both dogs to a neutral place to meet.  Ask a friend or family member not in your home to help you with your new dog, and have them meet you in a park or other neutral territory for them to meet. Your first dog with be comfortable with the friend or family member, and then you can take the dogs on a long walk to give them an opportunity to meet and get to know each other in a place where nobody “owns” the territory. Keep them separated at first (one in front, one in back), let them sniff each other without meeting face to face, then walk in between them, and when they’re ready they can walk side by side.

3. Allow your first dog to lead the way at first. After the two dogs meet, allow your first dog to do a few things before the new dog such as enter the house first so that they can invite the new dog into their territory. After this first crucial day, your first dog need not be the dominant of the pack. The two dogs will interact and make it apparent to you whether one is going to be more dominant than the other, or if they will both be equally as dominant or submissive. It is important not to treat a submissive dog as the dominant of the two, because it could make them anxious or nervous. 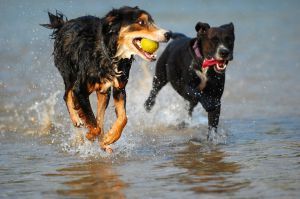 Hopefully with this help you can introduce a new dog into your home and both dogs will gain a best friend and play mate that they love.