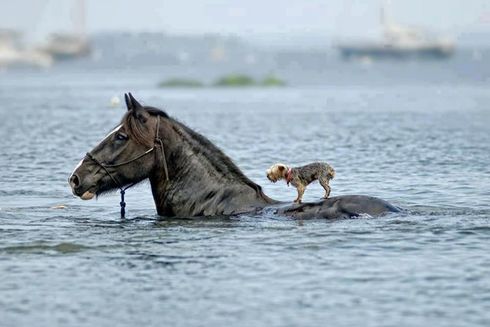 A dog named Abby is lucky to be alive after a horse came to her rescue during her greatest time of need.

Abby, a blind dog in Ukraine, escaped from her home and ran to a dock on the Danube river. He fell in and may have drown had it not been for a horse named Agripin.

Agripin had actually been swimming when he saw Abby struggling to stay above water. The river was shallow enough for Agripin to quickly reach Abby, who climbed onto the horse’s back.

Agripin’s owner looked on at the astounding scene and saw the horse carefully bring the dog to safety on shore.

This is a wonderful story but we’re sorry to say that it’s not true!

The dog is not blind and wasn’t rescued by the horse. The two animals are obviously pals, named Brenda Lee and Lucy and the beautiful photo was taken by equine photographer Jodie Sinclair. The Facebook page ‘Horses Know the Way Home’ has noticed that the photo has gone viral and is amused by all the fictional accounts. 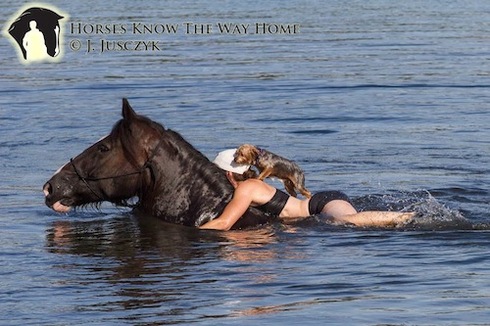 “A deaf Shire horse rescues a blind Yorki trying to save a drowning Belgian woman who was swimming in the Ourthe River southern Belgium.”