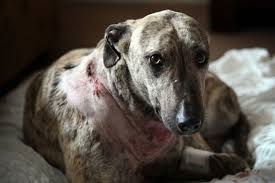 A severely injured Greyhound found at a roadside may have been used as ‘fight bait’, it has emerged. Warning: Graphic images.

The dog was found on a lane in Sunderland at the beginning of the week and was badly hurt with deep cuts, wounds and puncture marks. Those who found the animal – now named Bentley – reported that he was covered in dog food and was wearing a collar that had biscuits attached. This has led them to the belief that Bentley had been used as fight bait by a dog fighting ring. 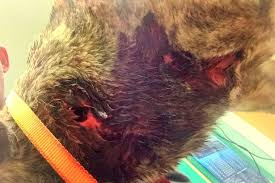 Once found, Bentley had emergency surgery at the King’s Road Veterinary Practice in Sunderland and is currently recuperating at the home of a volunteer. 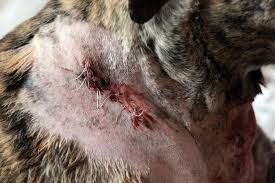 Bentley after his operation. Mirror.co.uk

Many were moved by seeing Bentley’s story online and over £1,500 was donated to pay for his care.

The Chronicle reported that local police found no evidence of a criminal offence. A Northumbria Police spokesman said ‘The dog has been treated and it is believed that no criminal offences have been committed.’