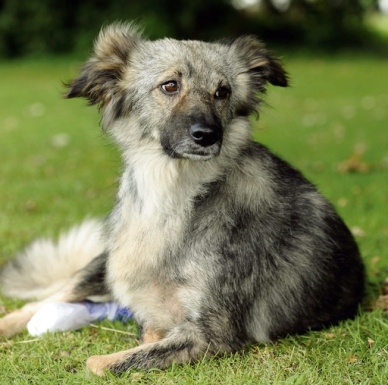 Many dogs in Romania are not treated well, but thanks to an English couple, at least one dog can spend the rest of her days living in luxury.

Glory is a four-year-old mixed breed from Bacău, Romania. She spent her live as a street dog, scrounging for enough food to survive. A kind factory worker noticed her sleeping nearby the building, and began to feed and keep an eye on her.

When the woman went on a week-long vacation in April, she was horrified to discover that Glory had been mutilated in her absence, with leg bones exposed. She took Glory to a vet, who was forced to amputate both of her front paws and part of a hind leg, leaving her with only one complete leg.

Photos of Glory on the operating table were posted on Facebook, a common trend in Europe. Many Romanian dogs are able to be adopted into loving homes this way.

Vanessa Bamkin happened upon the pictures of Glory and was appalled.

“It beggars belief that someone could actually do that,” she said.

Bamkin is a dog-lover and already has three collies, one of them a rescue from Ireland. She knew she had to save Glory from a miserable and likely short life in Romania.

“It sounds really corny but it just seemed like the right thing to do. I saw the pictures and my heart just melted.”

Bringing a street dog from Europe to the UK is a challenge; vaccinations and passports need to be secured, and then there was the matter of getting Glory to Bamkin’s home in Cumbria, a district on the northwest side of England. Glory was flown to England, but then had to be ferried to Cumbria. The entire trip was about 2,000 miles.

“I actually organized the transport,” said Bamkin. “There are lots of little outfits that will transport dogs.”

Glory is now getting accustomed to her new life. The other dogs – Poppy, Basil and Padraig – are still sniffing her out.

“Poppy has been the most protective of her, being the old girl.”

Glory is able to move herself a bit, but Bamkin does carry her for longer trips, and soon she will have a cart to help her get around. Her new mother also plans to get an artificial paw for her damaged hind leg. It will be costly at £1,400, but is working towards her goal.

“People have already started giving us money. My mum gave me £20 the other day.”

Glory now has her own Facebook page. Leave us your comments below.