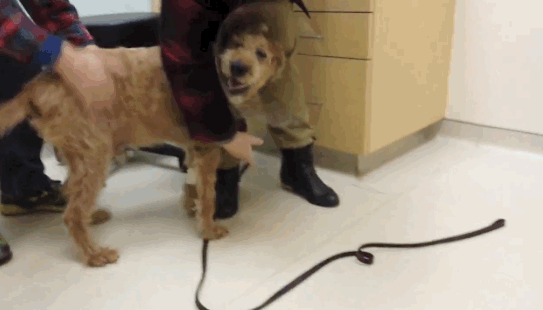 Duffy, a blind dog who underwent surgery to repair his eyesight, was filmed at the hospital when reunited with his owners after the operation. As a formerly blind dog who can now see, Duffy goes crazy at the sight of his owners. His tail wags at a mile a minute, and soon after the initial shock of seeing all of the people in the room who are squealing at him, he himself is so overwhelmed that he begins to squeal.

Though simple and bland at times, this video made me so happy. It’s so awesome that Duffy was given this second chance at sight, and he looks very grateful for it. I’m sure seeing his owners is his favorite thing in the world (besides maybe treats or digging holes) and he is no longer forced to be denied that simple pleasure.