Thailand, Cambodia, Laos, and Vietnam are trying to save dogs, supposedly man’s best friend, from restaurants in Vietnam, where they are served up as meat just as common as chicken or beef is served here in the UK.

The four governments agreed in principle to put an end to the trade in dogs for human consumption at a recent meeting in Hanoi, with a pledge to interdict the trafficking of canines from one country to another for the next five years.

The move, if successful, could save an estimate five million dogs from being slaughtered and eaten each year, according to the Asia Canine Protection Alliance, which spearheaded the meeting.

The alliance comprises the Change For Animals Foundation, Humane Society International, Animals Asia and the Soi Dog Foundation. It brought together anti dog-trade campaigners to meet officials of the four countries.

Smugglers in Thailand and traders in Cambodia and Laos all supply dogs to Vietnam where they are killed, cooked and served up in restaurants. Thai dog smugglers regularly take the animals across the Mekong River to Laos, from where they are sent on to Vietnam. Nakhon Phanom, Mukdahan and Bung Kan are the main provinces where dog smugglers operate. The dogs are transported in crowded, inhumane cages.

In Nakhon Phanom alone, the provincial Animal Quarantine Centre is taking care of over 1,400 dogs saved smugglers trying to send them across the Mekong River. The centre is running out of space to shelter more animals.

High demand for the dogs in Vietnam makes it attractive for the smugglers. Each animal can fetch 5,000 to 7,000 baht (around £100-£140), Chusak Phongphanit, chief of the centre, said in July.

John Dally, vice president of Soi Dog, a non-governmental organisation, welcomed the decision but was cautious about its implementation.

The interdiction of the dog trade was agreed on in principle, but whether it will be implemented by the four nations remains to be seen, he told the Bangkok Post.

Mr Dally affirmed that the Thai government is fully behind the plan. Posters have already been put up by the Bureau of Disease Control and Veterinary Services in areas near the borders in the northeastern region.

Boonseub Chemchoig, an inspector-general of the Interior Ministry, admitted it would be difficult to end the illegal trade.

“We never would allow the transfer of dogs from Thailand to Vietnam for the purpose of consumption,” he was quoted as saying in a press release issued by the alliance.

“We are still seeking a solution because the border between Thailand and neighbouring countries is long and difficult to manage.”

The dog meat trade is illegal in Thailand but it is not in Laos, Cambodia and Vietnam. Dog is one of the most  popular meats in Vietnam. 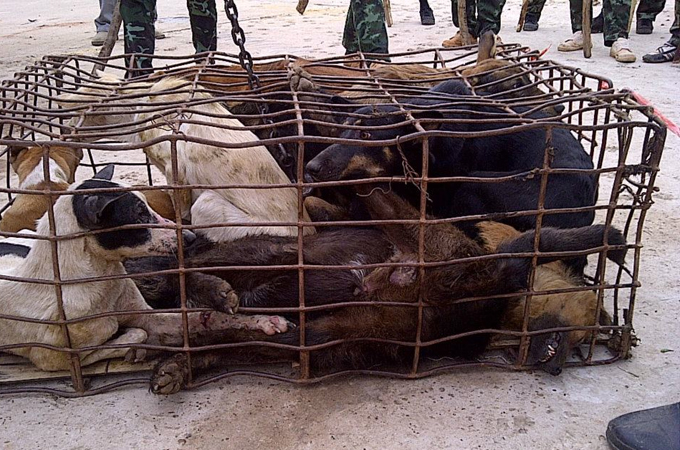 “We cannot change culture or habits, but we should stop the smuggling of dogs,” Pornpitak Panlar, a Disease Control Department official, was quoted as saying.

The meeting was called after reports by the World Health Organisation and the World Organisation for Animal Health that the dog meat trade has been linked to outbreaks of trichinellosis, cholera and rabies.

“This meeting was important to urge government agencies to see the problems caused by the dog meat trade and discuss a platform to stop the spread of rabies,” Dr Pornpitak said. Diseases transmittable from dogs to humans were often found on unvaccinated canines, he added.

Hundreds of pooches at a time are being hauled off to slaughterhouses. The traders do not have proper documents for all of them.

Nguyen Thu Thuy, deputy director of the Vietnamese Animal Health Department, agreed at the meeting that the cross-border dog trade exacerbated the spread of rabies, the press release said.

There are a number of individual e-petitions that you can sign to help put a stop to dog trafficking but the one we ask all of you to sign is this one:

We the Global Movement of NoToDogMeat– the International Coalition Against the Dog and Cat Meat Trade and part of the World Protection of Dogs and Cats in the Meat Trade do hereby formally oppose the illegal trade, torture and daily slaughter of millions dogs and cats including stolen pets primarily in South Korea, China, Vietnam, Laos, Philippines, Thailand, Indonesia yet not excluding all countries where this atrocity occurs.

Please share this article to raise awareness of this horrible trade of dog trafficking and ask your friends and family to sign the e-petition by clicking on the link above. Together we can make a change and save the lives of innocent dogs who were not put on this Earth to be eaten by us but to be loved and cared for as that is what they give back to us ten fold.