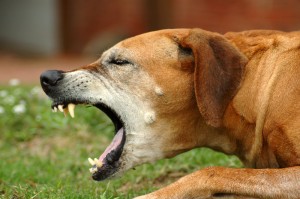 If your dog is hacking away or constantly making noises that make it sound like he’s choking on something, he may have a case of kennel cough. Although kennel cough can sound severe, most of the time it is not a serious condition, and most dogs will recover without treatment.

What is Kennel Cough?

Just as human colds may be caused by many different viruses, kennel cough itself can have multiple causes. One of the most common culprits is a bacterium called Bordetella bronchiseptica m– which is why kennel cough is often called Bordetella. Most dogs that become infected are infected with a virus at the same time. These viruses, which are known to make dogs more susceptible to contracting Bordetella infection, include canine adenovirus, canine distemper virus, canine herpes virus, and canine reovirus.

Dogs “catch” kennel cough when they inhale bacteria or virus particles into their respiratory tract. This tract is normally lined with a coating of mucus that traps infectious particles, but there are a number of factors that can weaken this protection and make dogs prone to kennel cough infection, which results in inflammation of the larynx (voice box) and trachea (windpipe).

The classic symptom of kennel cough is a persistent, forceful cough. This is distinct from a cough-like sound made by some dogs, especially little ones, which is called a reverse sneeze.

Some dogs with kennel cough may show other symptoms of illness, including sneezing, a runny nose, or eye discharge.

If your dog has kennel cough, he is unlikely to lose his appetite or have a decreased energy level. 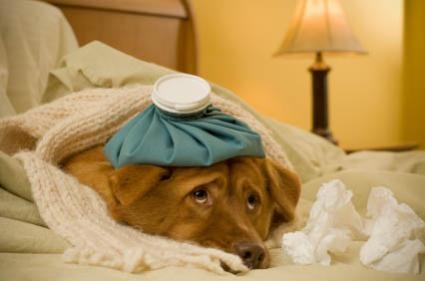 Kennel cough is contagious so if you expect this is what your dog is suffering from it’s best to keep him out of contact with other dogs.

Although most cases of kennel cough will resolve without treatment, medications may speed recovery or minimise symptoms during the course of infection.  These include antibiotics that target Bordetella bacteria and cough medicines.

Most dogs with kennel cough recover completely within three weeks, though it can take up to six weeks in older dogs or those with other medical conditions.

There are three forms of vaccine for kennel cough: one that is injected, one that is delivered as a nasal spray, and one that can be given by mouth. Although these vaccines may help, they do not guarantee protection against kennel cough simply because it can be caused by so many different kinds of bacteria and viruses. 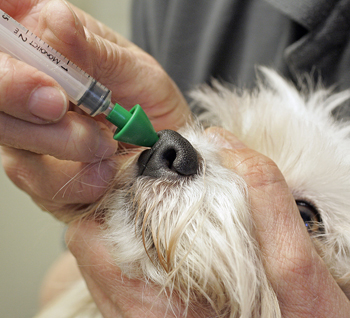 The injected form of the kennel cough vaccination is typically used for dogs that are likely to bite. Puppies typically receive two doses initially, about four weeks apart, followed by yearly booster injections.

The intranasal and oral kennel cough vaccinations are typically given to dogs once a year, but may be recommended to be given every six months for dogs at high risk for kennel cough. Administered in this form tends to provide protection against kennel cough sooner than the injected product.