Airports around the US are encouraging volunteers and their canine friends to become ‘Canine Greeters’, specially trained dogs that roam the terminals, greeting travellers and helping alleviate the many stresses of air travel, from long security lines to cancelled flights to upset children.

The dogs range from a nine-pound Boston terrier to a 175-pound Newfoundland, and they can be found everywhere at the airport — in the concourses and the baggage areas, the military courtesy room, the observation deck — anywhere a traveller (or a crew member) might benefit from a moment with a friendly face and a wagging tail.

“At times,” says John A. O’Donnell, CEO of the Albany Airport Authority, “Air travel can be stressful; the dogs have a calming effect on our travellers.” 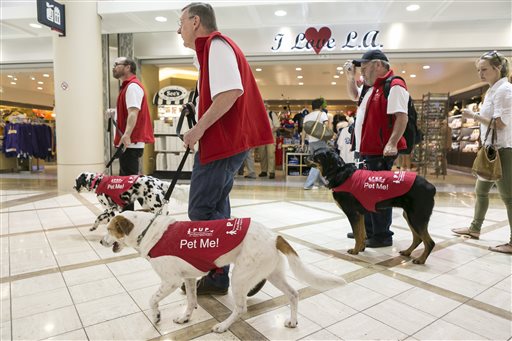 The program started almost by accident. “We had a dog called Mac that was on duty here with the Albany County Sheriff’s Department,” says Helen Chadderdon, director for the Airport Volunteer Ambassador Program. “Mac would greet all the children and although he was a narcotics dog, he was most friendly and everybody loved him. Mac inspired our program.” Sadly, he died last year, at age 13.

“I then had a volunteer ambassador who was training Breck, a yellow Lab,” says Chadderdon. “Breck came in and was very friendly, and he became our first Canine Greeter!” Then came Sasha, Zelda, Praise, Renzo-Gideon, and Gemini. After that, as Chadderdon says, “Word got out, and we went from six to 23.”

Albany is one of several airports around the country that have introduced some version of Canine Greeters. LAX airport for example calls its program Pets Unstressing Passengers (PUPs).

The handlers, part of a team of more than 130 volunteers in the airport’s Ambassador Program, which was launched in 1995 to assist travellers on their journeys, pointing them to arrival and departure gates, baggage claim, and ticketing areas. They wear burgundy blazers and large lapel pins that read “I’m Here to Help.” 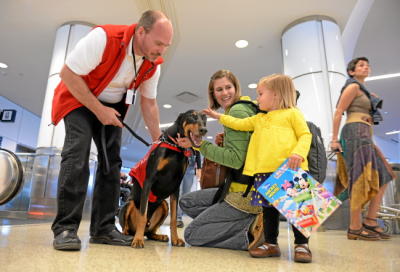 That’s the same pin each of the dogs wear. Most of them are AKC Good Citizens or accredited therapy dogs, and they are all hand-picked by Tim Fischer, the program’s evaluator and a former head of the New York State Police Canine Unit.

To participate in the program, dogs have to be well-groomed, healthy, stable, skilled, well-mannered, and able to work on a schedule. It goes without saying that a Canine Greeter needs to be comfortable in crowds, and shouldn’t be easily alarmed by loud noises. The handlers have to be sensitive to who might be afraid of dogs, or have allergies, or just plain not like to be around them.

Some of the canine greeters are even trained to provide a little pre-flight entertainment. Ziggy, for instance, entertains passengers by using his paws to count to 15. And Charley, a red Standard Poodle, says Chadderdon, “loves kids and can make any crying child smile!”

She adds, “Airport personnel love the dogs and know them by name. And the dogs love all the attention — what could be more rewarding than getting stroked and making anxious, weary passengers smile?