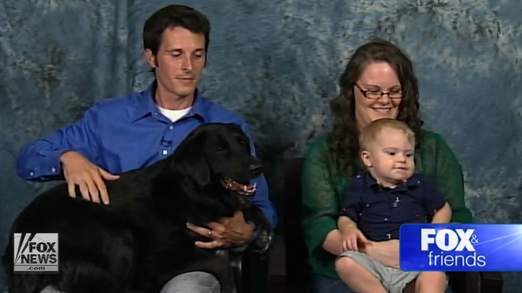 A couple has said their dog helped them discover the family babysitter was secretly abusing their baby when they were not at home.

Benjamin and Hope Jordan said they became suspicious about Alexis Khan after their dog, called Killian, started being aggressive towards her.

The 22-year-old woman pleaded guilty to assault and battery charges earlier this week and will serve one to three years in prison, reports say.

Mr Jordan, from Charleston, South Carolina, said: “About five months into her being our babysitter, we started to notice that our dog was very protective of our son when she would come in the door.”

“He was very aggressive towards her and a few times we actually had to physically restrain our dog from going towards her.”

After noticing the dog’s behaviour towards Khan, the couple put a mobile phone under the sofa to record for several hours what was happening when they their left seven-month-old Finn in her care.

“Then you hear slap noises and his crying changes from a distress cry to a pain cry. I just wanted to reach through the audio tape, go back in time and just grab him up.

“To know that (for) five months I had handed my child to a monster, not knowing what was going on in my house for that day.”

Charleston City Police arrested Khan, who had initially passed a criminal background check conducted by the Jordans, a few weeks later and she confessed to the abuse.

State authorities will also reportedly place Khan on a child abuse registry, meaning she can no longer work with children.

Mr Jordan told Fox News: “He is a very personable dog so for him to show aggression toward anyone is a sign that something was wrong because he never shows aggression.

“Just the simple mannerisms of him raising his hair up, getting excited, getting worried about our son, was definitely enough to make us understand that he was trying to tell us something about this babysitter.”

Mrs Jordan described what she heard in the recording as “a nightmare”.

She said: “For seven and a half hours my son cried nearly the entire time. She was cursing at him, calling him horrible names and it came for no reason.

“He wasn’t acting up. He hadn’t been crying until she left him alone in his crib for hours and of course the physical abuse.”

Mr Jordan added: “The biggest concern for us was the slapped noises that we could hear over the audio.

“Obviously we could not tell because it was an audio recording where he was being slapped but you could hear his cries afterwards and it sounded like he was being shaken.

“You could hear the reverberation in his voice as he is being shaken and that is what disturbed us the most.”