A Collie Cross has been found at the summit of England’s highest mountain, Scafell Pike.

The male dog – now nicknamed Scafell – was found by holiday makers who say it took half an hour to coax to petrified pup over to them.

When English police were unable to help the couple to find the dog’s owner, they took him home with them to Scotland. Scafell is now in the care of the Scottish SPCA. Believed to be between 5 and 8 years old, he is unfortunately not microchipped. 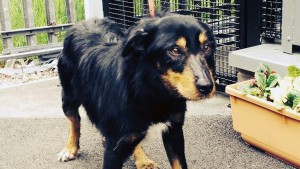 Scottish SPCA manager Anna O’Donnell said: “The couple who found Scafell said he was petrified and nervous and it took them around half an hour to coax him over to them. Unfortunately Scafell isn’t microchipped so we have been unable to trace his owner. We have also searched for information about dogs who have gone missing in the area with no luck.”

She added: “It would be fantastic if we are able to reunite him with his owner if he has gone missing. If not, we will find him a loving new home in Scotland.”

It remains a mystery how poor Scafell ended up alone at the summit. It is likely that he became separated from his owner during a walk or he sadly may have been dumped nearby.