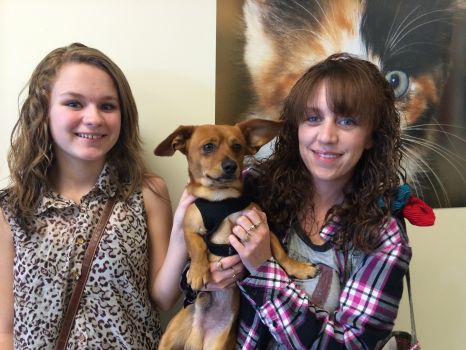 A three year old Chihuahua found over 1000 miles from home has made the news this week. Corbin dug a hole in his Texas backyard and got out, then resurfaced three days later in Hamilton, Ohio. It’s a huge distance for a dog of his size to cover in just three days, but his owner, Mike has speculations, “because we’re in a military town, and people come and go a lot, he may have jumped in the back of somebody’s U-haul”.

There are surveillance tapes from outside the Animal Friends Humane Society, where Corbin was left, of a woman dropping him off and tying him to a bench. It rained and stormed that whole night, and when Corbin was found the next morning he was scared and shivering from the damp cold. This has left quite a few people upset as it was clear the shelter wasn’t open (the hours were posted on the door), and the dog suffered through the night for no reason. The shelter is still trying to figure out who the woman is and why she left the dog in the rain.

Corbin has his microchip to thank for being found and reunited with his owners, which is the same in the case of Avery, who was found eight months after going missing because of her chip. Microchipping is still under debate for some for whatever reason, but I believe that microchips are helping dogs find their way home all the time now, and that’s a great thing.