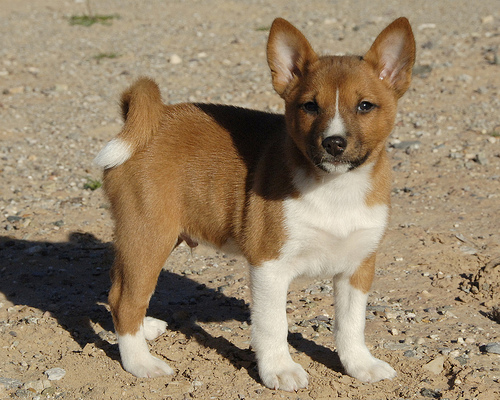 The Basenji is one of the few dogs in the world that doesn’t – wait for it – BARK! I can hardly believe that I haven’t heard of this barkless wonder before, but now that I have I want to know everything! The Basenji is a lion hunter that hunts with the aid of both sight and sound. Rather than bark when they have found their pray, they yelp, unable to bark, because of the shape of their larynx. They are very independent dogs who groom themselves, much like a calm and quiet domestic cat. The Basenji is super smart, very sneaky, and though they are not easy to train, with the time and effort they make great companions (to one or two members of the family usually, like cats). Basenji dogs have tightly coiled tails and wrinkled foreheads with large ears perched on top.

This is probably the most interesting dog I’ve ever hear of, and I can’t say that I’ve ever seen a Basenji in person. If you want to learn more, check out the video!