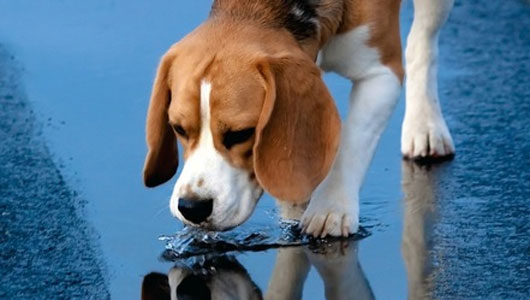 Read on to discover the causes, symptoms and treatments for Antifreeze poisoning in dogs.

Causes of Antifreeze poisoning in dogs

Predominantly used for the prevention of the freezing up of water, Antifreeze contains the toxin ethylene glycol, a potentially fatal chemical that can also be found in car engines as well as hydraulic brake fluids.

Your dog can come into contact with Antifreeze through leakage from your car’s radiator, or even in toilets to ‘winterize’ the pipes during colder months of the year. Once ingested, the chemical may seem tasteless -or even tastes good for some animals- and dogs are at risk of drinking large amounts before feeling the symptoms.

The effect Antifreeze poisoning can have on your dog depends largely on the amount consumed, and it is estimated that five tablespoons are enough to kill a medium-sized dog. Nevertheless, the symptoms of Antifreeze poisoning in dogs will progressively become worse the longer the dog remains untreated due to the liver breaking down the toxins into other other substances. Early stages symptoms include:

Later stages symptoms can progress into: The first hours of poisoning are critical in seeking treatment for your pet, as most pets that are left untreated rarely survive. Treatment often involves attempting to limit any absorption of the body to the toxins by increasing excretion for the substance to be removed automatically. Manual removal of the substance can also be taken as a method of treatment.

IV fluids are often administered to correct any dehydration which may have occurred and to prevent it from developing throughout treatment. The vet will continue to administer bicarbonate to to correct the pH level of the body.

Due to the high risk of cases of Antifreeze poisoning, it is essential to take all the necessary precautions to avoid any contact your pet might have with this substance. This includes avoiding its use in-house, or keeping toilet lids closed and bathroom doors shut if the substance was use for wintering pipes. Moreover, it is recommended to keep your pet away from wandering unattended into garages, alleyways or any other areas where spills may have occurred. If you are to store Antifreeze substances in or around your house, make sure they remain tightly closed and hidden away from pet’s easy reach.

Another precaution to be taken is to monitor your pets closely for any signs of poisoning, and to consistently check surroundings for any instances of leaks.