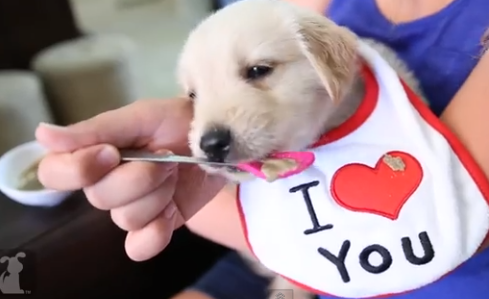 Well folks, I’m sure I’ve said this before, but I have never seen anything cuter in my short life. This little golden retriever puppy is just the epitome of adorable and he doesn’t even know it. The little pup is enjoying some puppy food off a spoon wearing a bib that says “I heart you” (that’s cute enough to make anyone melt) and in the middle of it all his exhaustion overtakes him and he falls asleep mid lick. Too much exertion for such a wittle itty bitty guy. I love this little puppy, and I think I could teach him a thing or two about hamming it up like that for the rest of his life, but you know, I think he’s probably got that under control. Watch and melt, friends.

I'm a lean little pup from New York with a passion for shoes, napkins, and peanut butter. I like causing trouble, and I get away with it because, well look at me, I'm adorable. My humans are constantly screaming my name followed by "drop it" (this is when I know they want to see my best dance moves, so I chase my tail), or "be quiet" (they try to help me with my spying abilities as much as possible when I'm peeking out the window staring at our neighbors). I love making my humans chase me, and hanging out with all of my friends in the neighborhood. I am constantly checking my twitter while my humans are out at work, so say hi to me there!

Disabled Puppy Learns to Walk for the First Time!

4 Pranks To Play On Your Dog